Performances and publications for the 250th anniversary of his death

As editorial director of the Complete Edition Opera omnia Jean-Philippe Rameau, which is distributed by Bärenreiter and Alkor, my task is to publish various major works by 2014, including the first version of Dardanus (1739), the second version of Castor et Pollux (1754) and Les Indes galantes (1735), as well as less well-known works of comparable quality, such as Les Fêtes de l’Hymen et de l’Amour (1747), Naïs (1749) and Le Temple de la Gloire (1745). Each title in this Complete Edition comprises a conductor’s score with the critical edition of the work (and an overview of the history of the work in two languages, together with a detailed critical apparatus), performance material and a vocal score. The musicologists responsible for the various specialist areas work in close association with the scholarly team of the Opera omnia Rameau edition. In line with long-established tradition at Bärenreiter publishers, this critical edition reflects as far as possible the composer’s intentions.

As well as these many events, I should mention the Catalogue thématique des œuvres musicales which I am editing in collaboration with Denis Herlin and Pascal Denécheau; the third volume of this will be published in autumn 2012, covering the operas Acante et Céphise to Hippolyte et Aricie; the fourth volume (covering Les Indes galantes to Zoroastre) will be completed in 2014.
All these activities in honour of Rameau would not be complete without a monograph on his life, his musical works and theoretical and scholarly writings. My book Rameau, musicien des Lumières, the result of over thirty years’ research, will be published by Fayard in 2013.

As well as numerous opera projects, details of which are to be confirmed, an international conference will be held in 2014 (probably in March); participants will include the Institut de recherche sur le patrimoine musicale en France, the Bibliothèque national de France, the Opéra comique and the Fondation Royaumont. In connection with this conference and the Rameau Festival, an exhibition is planned for the first half of 2014, devised by Elizabeth Giuliani, Florence Gétreau, Nicole Lallement and myself, which will take place in the Museum of the Paris Opéra. 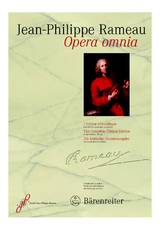