There are secondary sources that contain many performance instructions which cannot assuredly be attributed to Leoncavallo. While previous editions mostly include these instructions, in this edition only those have been taken over which the composer authorized, which are musically justified, or which reflect the performance tradition and are of practical value (such as metronome markings or “puntature”). In all cases, they have been offset typographically from markings based on the autograph. An important source, namely a copy of the first printed score, contains corrections in the composer's hand. Bärenreiter's new edition is the first to offer this valuable information to performers and scholars.

The libretto for “Pagliacci” was written by Leoncavallo himself. Regarding the singing text and stage directions, the new edition takes into account the autograph as well as a number of other sources directly linked to the composer.

As a result of clearly stated and applied editorial guidelines, this new edition of “Pagliacci” offers a consistent musical text that adheres to Leoncavallo's intentions.

Maurel, Sonzogno, and the New Critical Edition of Leoncavallo’s „Pagliacci“

Baritone Victor Maurel and publisher Edoardo Sonzogno each contributed to the immensely successful “Pagliacci”. The new critical edition reveals the connections and leaves the choice up to the performers.

On 8 August 1943, the British Bomber Command began a series of nightly aerial attacks on Milan. Among the cultural treasures lost were the archives of the Casa Musicale Sonzogno—Ruggero Leoncavallo’s publisher—and the Teatro Dal Verme, where “Pagliacci” was first performed. In light of the resulting scarcity of sources pertaining to the opera’s compositional history, scholarship has heavily relied on Leoncavallo’s “Appunti,” an incomplete and unpublished autobiography, without considering such important sources as Sonzogno’s letters to Leoncavallo (probably because they are notoriously difficult to decipher), notifications in the press, and the recollections of Victor Maurel, the creator of Jago, Falstaff, and Tonio.

It has been speculated but poorly documented that Maurel in particular played an important role in the composition of “Pagliacci”. He himself shed light on this matter in a 1920 interview with “Il Carroccio”, a journal published in New York for “Italian culture, propaganda, and defense in America.” In this interview, he claims that he suggested the addition of a prologue and tried to stimulate Leoncavallo’s creativity by providing verses, vocal characterization, and staging.

The verses Maurel claims he gave Leoncavallo consisted of a dozen free verses borrowed from a presentation he had delivered shortly before Leoncavallo began work on the “Prologue.” In this presentation, he talked about “the cruel moments in which the actor, the artist can be placed before the audience,” words that resonate with Manuel Tamayo y Baus’s play “Un drama nuevo” (1867) as it was performed in Italy by the troupe of Ermete Novelli. One of the scenes Novelli added even begins with the words “Si può?” the first two words of the “Prologue.” It is difficult to imagine that Maurel would not have known this play.

Maurel’s influence did not end with the “Prologue.” He insisted, for instance, that the character of “Tonio” not be crippled. As a result, Leoncavallo changed his characterization from “gobbo” (hunchback) to “scemo” (simpleton), a change that required the alteration of melodic lines in the score. It was clear, however, that Leoncavallo did not intend for this description to stand beyond the opening run of performances, and when Sonzogno’s subsequent printing of the libretto did not revert to the original text, Leoncavallo complained: “Prior to Mr. Edoardo’s departure, we had agreed that the words I had changed in the libretto only for Maurel be restored and that Tonio be made a ‘gobbo’ as I had wanted it. I made the corrections and submitted them. Now, to my surprise, in the librettos that I requested from maestro Galli and that have been sent to me, there is not a single accommodation whatsoever.” The term “gobbo” was eventually restored.

This was not the first time Leoncavallo was unhappy with Sonzogno. Shortly after the premiere, Leoncavallo suggested to Sonzogno that the opera might be slightly lengthened, the duet between Nedda and Silvio slightly shortened, and the new act II prefaced by a small “preludietto.” The “preludietto” eventually became the famous “Intermezzo,” but Leoncavallo changed his mind about cuts to the duet. In fact, the more Sonzogno pushed, the more Leoncavallo resisted, eventually exhausting his publisher’s patience. Sonzogno made a final appeal: “Galli writes to me that you absolutely do not want to take the advice to abbreviate your “Pagliacci”. I’m displeased because I consider this a grave error that will hurt us in all your works to come. […] Cut here and there, lighten up the score, and make it faster, and the more notes you’ll sacrifice, I assure you, the greater the applause and financial reward you will receive. It is not necessary to be stingy with one’s riches. Throw a bit of gold out of the window, and it will re-enter in banknotes through the door.”

Eventually Leoncavallo relented, making a single, voluntary cut. In an ironic twist, he later adopted Sonzogno’s argument, perhaps in connection with a planned performance at the Opéra-Comique, when Maurel asked the composer to lengthen the part of Tonio beyond the addition of the “Prologue” by expanding the scene between him and Nedda in act I. Leoncavallo responded: “If you had only asked me to cut something, I would have grimaced a bit but would have been indulgent. But asking me to lengthen a scene that must have the effect of a trail of gunpowder, a scene that must be violence itself, for the pleasure of singing something at all cost, no really! You know that if I have one quality, it is that of being a man of the theater, and with the experience I have acquired, I have a horror of lengths and of things that drag. And besides, my friend, this piece has now been performed around the world for nearly seven years, and all I have found to do is a cut in the duet between Silvio and Nedda that, in my inexperience, I had made a bit long.”  Nevertheless, Leoncavallo was willing to accommodate Maurel, proposing instead an addition for Tonio at the beginning of the “Commedia”: “RECEIVED TELEGRAM, WILL ADD [TO] SECOND ACT THIS: TONIO WOULD ENTER HUMMING A SONG ARRANGE THE FURNITURE AND EXPLAIN TO THE PUBLIC ON STAGE [THE] TITLE [OF] THE PIECE WITH ALLUSIONS [TO] THE MISFORTUNE [OF] CANIO, [AND] ESCAPE SEEING NEDDA WHO ENTERS THE STAGE, TELEGRAPH IF SATISFIED: LEONCAVALLO.” Nothing ever came of this plan.

Even though Maurel was selfish in trying to get Leoncavallo to lengthen the part of Tonio, he was immensely helpful in bringing Pagliacci to the stage. He used his influence to include it on the spring schedule of the Teatro Dal Verme, offering in return to sing Hamlet in Ambroise Thomas’s homonymous opera. And when a lack of leadership jeopardized his plan, he took control himself: “Very familiar with Milan in all that concerned matters of the stage and the theater, forty-eight hours sufficed to put everything in order.”

Maurel’s and Sonzogno’s involvement are reflected in this new critical edition of “Pagliacci”. It is clear that the “Prologue” and “Intermezzo” are later additions and that the opera was originally considered complete without them. This suggests that “Pagliacci” should be made available in two versions: a one-act version reflecting Leoncavallo’s original conception, thus without the “Prologue” and “Intermezzo”; and a two-act version that includes these later additions. One might ask with justification why anyone would want to perform “Pagliacci” in one act, without two of its most popular pieces. The short answer is historical: Leoncavallo at some point considered the one-act version to be complete. The longer answer is practical. Unlike the final version, the original one can be convincingly performed in one act without seeming too long, and it brings “Pagliacci” within reach of companies and educational institutions lacking a baritone strong enough to sing the role of Tonio when it includes the “Prologue.” 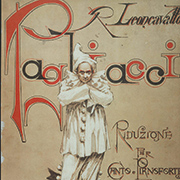